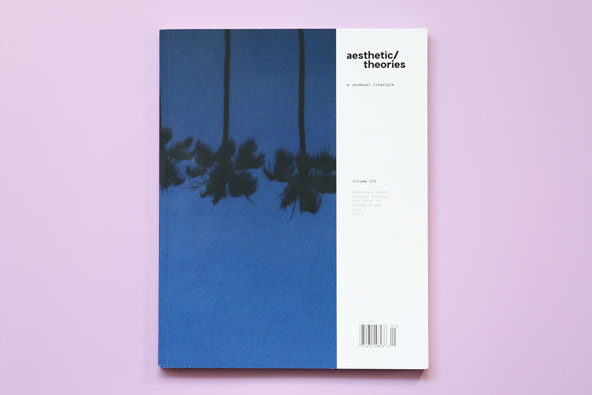 Now in its second volume, aesthetic/theories is a biannual print publication focused on featuring artists, designers, intellectuals, and institutions that reflect and shape our cultural and creative patterns. We caught up with its editor, Samine Joudat, to discover more about how the magazine started, the influence of Los Angeles and what we can find in volume 2. What made you start aesthetic/theories and how did you put together the team behind the publication?

It started from a point that was the convergence of a few different factors. The idea had been in my head for a long time. Not necessarily that of a publication, but an idea that, in some form or another, would be investigating humanity on a broad scale and linking together big fields that people often treat in silos. Photography, art, philosophy, architecture, design, and even technology and sport are often just different frames of reference expressing similar ideas or solving similar problems at their core. I’ve always been interested in philosophy and theoretical ideas of how humanity takes in experiences and conjures meaning out of them. Hence the name, which is a play on Theodor Adorno’s ‘Aesthetic Theory’, in which he traced the influence of art, music, and aesthetics on culture, and vice versa.

Timing is the other factor. The impetus to give this thing actual life was me recovering from a serious leg injury that required 9 months of rehab. It changed the trajectory of what I was set on doing following graduate school – working in advertising in New York. My brief experience with the advertising world and the big advertising players was that, here is a field filled with a lot of really cool and bright people, who are being swallowed by their organizations’ antiquated natures. It was like: ‘we want you to be out of the box, but, like, not too out of the box. In fact, can you fit in this oval right here?’

So, aesthetic/theories was at once both a curiosity to pursue while I was bedridden and, in my own way, a ‘fuck you’ to the advertising industry.

The team came together very organically; it’s a fluid collection of my friends and my girlfriend, to whom I owe a lot of gratitude for pushing me to pursue this and supporting me throughout. We’re close and all collaborate really well and share complementary creative vibes, so it’s felt like a very natural process. My father and uncle, immigrants from Iran, have also been immensely supportive. Beyond the core team though, there has been so much ideation and collaboration and help from different people that I’ve come to know over the years or have just recently met. People who immediately support my vision for a/t and want to help and support what it stands for. So much so that it’s gotten me thinking of far-fetched ideas like a completely open-sourced magazine with as much of a democratic structure as possible. Can you tell us about what we can find in volume 2?

Volume 002 was about taking the broader ideas behind the birth of the magazine, as stated above, and narrowing them. It is, editorially, about exploring the inherent tensions between ‘art’ and ‘creativity’ and ‘profit’. We wanted to explore artists, designers, intellectuals, and institutions that are expressing their creative ethos authentically and resisting the tides of commercialization.

You’re based in Los Angeles and the city is present in several articles in this volume, can you tell us about how it influences the publication?

LA, like any great city in our world, embodies and reflects so much of our species – both in its good and bad. What people probably misunderstand about LA, is that it is a city both ethereal and gritty. Not just one or the other. It is a place that promotes endless aspiration alongside terrible but also beautiful urban realities. A lot of cities embody this trait, but LA’s ecology is so diverse, its geography so large, that it creates this on a huge scale – a vast expanse through which you can literally drive for hours for inspiration. Through the sheer scale of skyscrapers in downtown, to the creative hub of the arts district, to the surreal hills and palm trees of Hollywood, to the beaches of Santa Monica and Malibu, to the decrepit poverty of the marginalized, interspersed wherever they haven’t been pushed out yet. There is a lot of fascinating history here and a rapidly burgeoning creative scene that I think will soon rival New York’s best, if it doesn’t already.

I should also mention that David Lynch’s Mulholland Drive had a big influence on the style and design of volume 002. What do you hope people experience when they read aesthetic/theories?

I hope they think a little bit deeper about the things, people, and rituals they interact with every day and that they appreciate the role of beauty alongside function.

How do you see aesthetic/theories evolving in the next volumes? Are you planning to experiment with the content and format of the publication?

I can only speak about the short-term, and I’m really excited about volume 003. I can say that it will be centered around the ideas of ‘complexity theory’ – which is a field dedicated to exploring the rules governing dynamic systems, from architecture to ecosystems to social media and beyond. Like the idea behind aesthetic/theories, it is a very multidisciplinary field that attempts to find the common links present in seemingly disparate phenomena, in hopes of progressing humanity past its most challenging obstacles. The creative possibilities of an issue focusing on complexity theory are wild, so I’m really looking forward to it.

We do have some cool ideas in the works behind experimenting with both content and format. Stay tuned. But we are dedicated to keeping the core idea of aesthetic/theories as a print publication, forever and always. What have been some of the biggest challenges you’ve faced since starting aesthetic/theories? What have you learnt?

Lots of challenges. All sorts. I’m stressed thinking about them right now haha. Most have to do with the logistical and financial trappings of a creative start-up. But the biggest one of them all, I have ultimately learned, is strategic. In an ideal world, how big does aesthetic/theories scale if it resonates in the hands and eyes of its customer? I’ll keep you posted when we figure it out 😉

The beginning of the 2010s saw a boom in independent publishing but it seems like it has slowed down over the past couple of years. What are your thoughts on the current state of independent publications?

It’s tough for me to answer that because we have just recently entered into it, and so it feels like it’s not slowing down at all, with all the publications and events that seem to be popping up. There are extremely bright and talented people creating some incredible works that express incredible ideas right now in independent publishing. So there is no dearth of supply. The real question is the demand, and I think that is also the most interesting aspect. In terms of scale, no print publication will be able to rival digital anymore (probably). But there is a real opportunity to connect with young audiences that are being cluster-bombed with fleeting digital information, all the time. I am one of them. It’s really refreshing, in your downtime, to be able to actually pick up a beautifully designed object and read really good, relevant content inside. It’s something I think young people are hungry for and digital can’t provide.